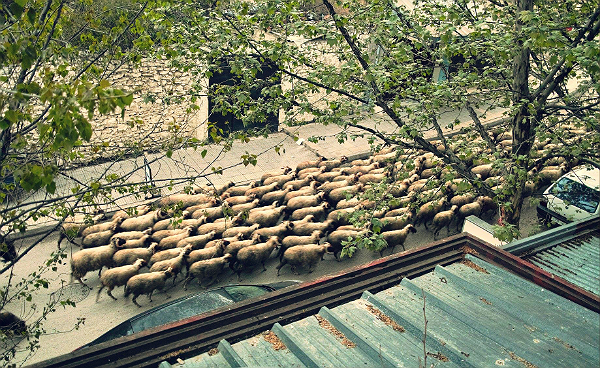 Six in the morning, all the sheep I counted last night turned into real ones and went home.
Bye-bye, see you again at night.
(photo & story by Tengyo Kura, Azrou) 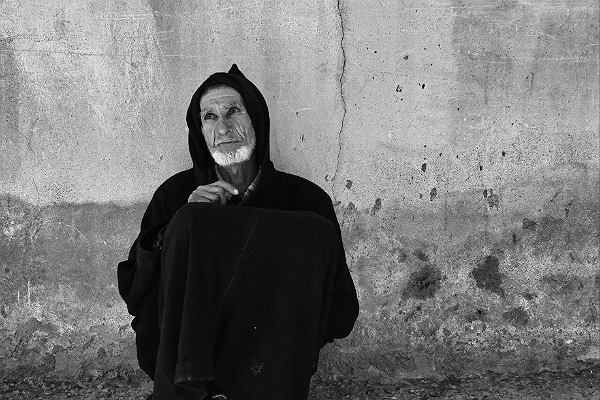 When I was headed for an ancient city, then I saw a man sitting on the street.
His hermit-like appearance caught my curiosity.
I approached him and asked.
“Could I ask you something?”
He quietly looked at me, and kept gazing at my eyes for a while.
It was like that his soul dived into mine through my eyes.
I felt nervous.
“What do you want to know?”
After the silence he opened his mouth.
His voice had shaken not only my eardrum but also my soul.
I tried to remain calm, but I became blank completely.
"Well, I actually don't know what I want to know..."
I was embarrassed.
He stayed silent for a while, then beckoned me.
I went next to him, and crouched with a confused feeling.
He again stared at my eyes, it almost made me feel my eyes burnt.
Then he gently held my head and kissed on my forehead as chanted something.
"Now you go," he said without looking at me.
I did not know how to respond.
"My son, now you know. It is more important to find a question than to find an answer sometimes."
He looked into my eyes, but this time I did not feel nervous nor scared.
"May peace be upon you," he blessed me then went back to his own time and space.
"Thank you," I said in my heart, and went back to my way to the ancient city.
(photo & story by Tengyo Kura, Fez) 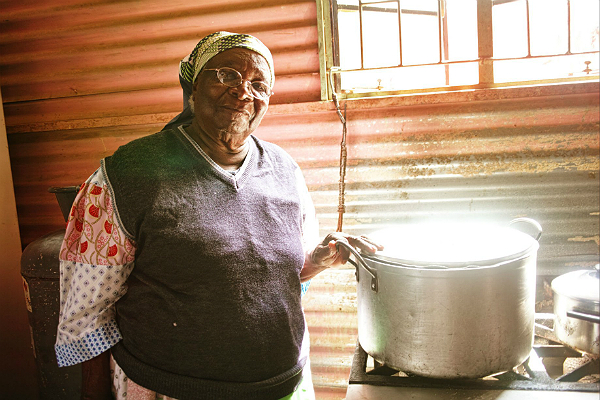 Aunt Christina, 84 years old, has been serving food to vulnerable children since 2002.
She opened her soup kitchen to help eight orphans in the beginning, now she has 200 children who eat at her place daily.
From Monday to Friday, to prepare enough food for 200 children of good appetite Aunt Christina starts cooking at 5 o’clock in the morning.
“Children in Africa have many problems like drugs, alcohol, and crimes because of poverty,” she said.
“I believe in that children do not commit such things when they eat enough.”
She has no financial support for her soup kitchen, she covers all the expenses on her own.
“Sometimes I have no money to buy gas for cooking,” she honestly spoke.
“We do not have enough support for vulnerable children in Namibia. Many children cannot buy shoes nor clothing. Some of them have nothing to eat all day long.”
One of the biggest problems of the Namibian children today is HIV infection.
To make pills work effectively, HIV-positive children need to eat something when they take the pills.
This is also the reason why Aunt Christina continues her soup kitchen.
“God tells me that I must help those children,” she said firmly.
I asked her what she would like to say when she met God someday.
After a little while she replied.
“It was very difficult, but I did not give up. I kept fighting for children till the end. I let none of them go home hungry.”
Her happiness is when she sees children eating well and studying hard.
“I always pray to God that children can study for their better future,” she told me earnestly.
Nowadays she has knee pain, but she is in good health generally.
I truly admire her for her persistent care and support for children more than 15 years.
At last, out of mere curiosity I asked her how many family members she had got.
“200,” she immediately answered, and smiled gently.
“They are all my children.”
(photo & story by Tengyo Kura, Katutura) 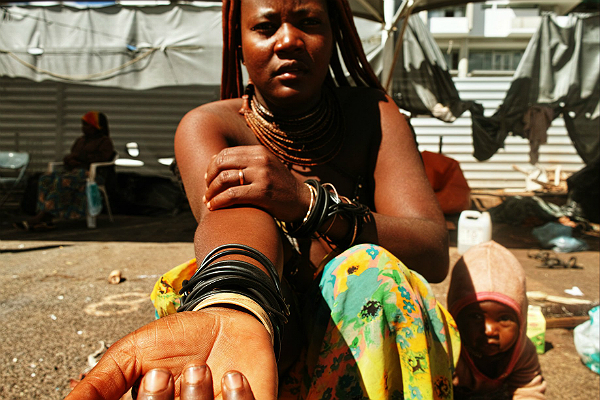 “Looking for a gift? I have something nice, come here and look!”
A cheerful woman stopped me at the roadside after a short-time rainfall.
Her unique tribal outfit made a great contrast to the modern city.
Thick hair plaits, reddish skin colour, and exposed breasts.
She was a woman of Himba, the last (semi) nomadic people in Namibia.
Curiously approached, I saw her having an accessory-like thing in her hand.
“What is it?”
“Our tribal bracelet, I can give you a good price!”
The milky-white coloured bracelet was lightly covered with red dirt.
“I made this by myself,” she said.
“Is it made of bone?”
“Used to be, but we use plastic nowadays. We recycle polyvinyl pipes. It’s our latest fashion trend!”
She laughed and started singing loudly and joyfully.
Her song continued while I was looking at a set of her bracelets.
There were various patterns and designs of animals, plants, and the Himba culture.
Himba people lead their traditional nomadic life in the northern part of Namibia.
Ancestor worship and witchcraft (black magic) play important roles in their society.
Like her, some of them have adapted to changes in their modernized environment and have settled, but still Himba people are bearers of the significant African nomadic culture to be transmitted to the next generation.
“What song were you singing, by the way?”
I asked her who was now dandling her baby.
“A prayer song. I prayed to spirits to carry the rain all the way to my homeland in the north where you find no water.”
Looking up the grey sky, my thoughts went to the northern dry land.
Then she threw down one bracelet in front of me.
“It’s good for you. The colour matches your skin!“
It was the least typical tribal patterned bracelet.
“Okay, I will take this.”
Two couples of two-way arrows are facing each other, and there was a big slash mark in the middle.
The arrows seemed artless.
“What do these arrows mean?”
“Unknown.”
She looked at me with her friendly smile.
I looked at the bracelet closely, and talked to myself.
“Unknown…”
We shook hands, and I started away.
As I put the bracelet on, I hoped the rain would reach her homeland soon.
(photo & story by Tengyo Kura, Windhoek) 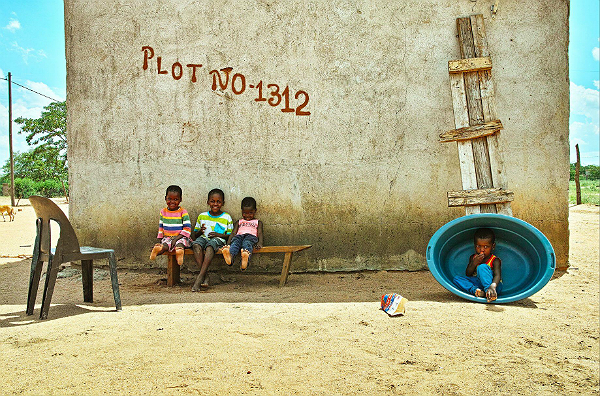 I saw three little children coming toward me in a narrow street on my way home from a grocery store.
Since my phone was stolen on the road recently, I had been trying not to be too friendly with strangers who were too friendly with me.
But when the children just opened their arms and ran into me for giving me a hug, it's a different story.
They were so small, they only hugged my legs.
Before they were gone, one of them said "I like your trousers, can you give them to me?"
I smiled and said "When we meet next time!"
It was my last day in Botswana.
I believe that it was a celebration on my departure by three angels.
(photo & story by Tengyo Kura, Gaborone) 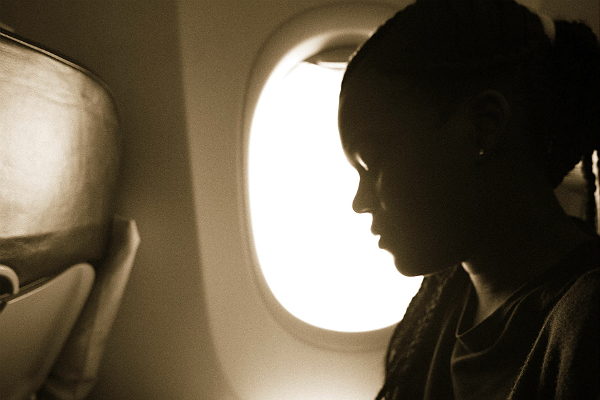 "This is the first flight experience in my life," she said.
The 18 year-old Tanzanian girl was impressed by what she saw through the window.
"I'm going to study in South Africa for two years. I feel nervous," she smiled bitterly.
"I don't know anything about outside of my home."
After a bit of silence, I said to her.
"You know, I've been constantly changing my place to live for 17 years. And I still feel very nervous when I go to unknown places. Just imagine a 45-year old man tries to forget his nervousness by eating candy on his way."
She smiled again, but purely this time.
"Accept your being nervous, that's how we prepare for what we are going to try something new and exciting."
"To live in a new place of different culture is difficult. But it's an interesting way to reinvent yourself."
She quietly thought about something, then looked outside the window again.
The airplane began to descend towards Johannesburg slowly.
(photo & story by Tengyo Kura, Johannesburg) 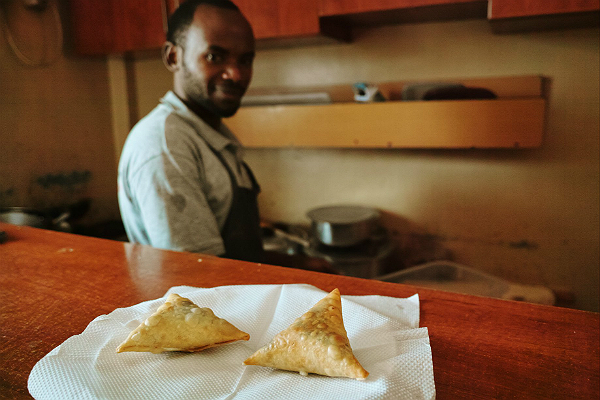 When the rain started, I was on my way to a post office.
I had a small umbrella but the rain became too hard, I ran into a nearby shop.
There was a small kitchen inside, and a man was making samosa there.
“Can I have some samosas?”
Putting my umbrella on the floor and sitting at a table, I asked the man.
“Five minutes.”
Gave me a smile and said him.
The shop had a balcony behind, rice fields and hills stretched as far as the eye could see.
I was gazing outside blankly when the man said my samosas were ready.
The freshly-made samosas filled my body and soul with satisfaction.
The rain had already stopped.
Paying the price, I asked the man his name.
“I’m Carrist,” he replied.
“Oh, sounds like Christ, doesn’t it?”
Hearing me said so, he laughed.
“Thanks for the good samosas,” I said and left the shop.
Soon after I remembered that I forgot my umbrella.
When Carrist saw me coming back, he said “You forgot your parents’ love?”
I didn’t understand what he meant.
“When the rain stopped, you forgot your umbrella which protected you from the rain.”
He continued.
“It’s like when you became independent you forgot what your parents had done for you when you were young.”
Smiled and said him.
“Ah, you’re right.”
So responded, I neatly furled my umbrella and went out of the shop.
While walking to a post office I wondered if I would ever remember my parents when I had left my umbrella somewhere next time.
(photo & story by Tengyo Kura, Kigali) 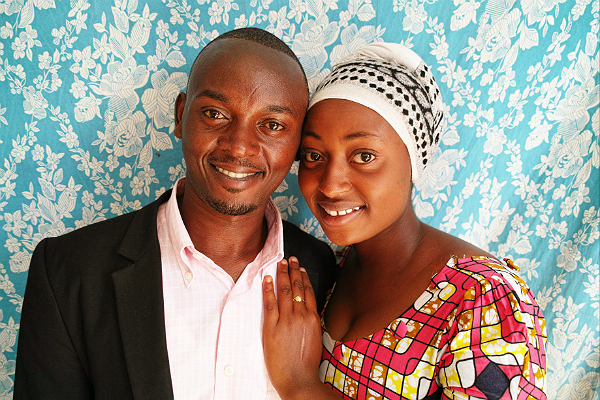 One relaxing Saturday morning at a border town between Rwanda and Congo, I met a soon-to-marry couple at a local milk shop where people enjoy fresh sour milk.
After we exchanged our thoughts on life and world, the man said sadly.
"Today, people are divided all over the world. Politics, economy, religion, anything can be a trigger of our divide."
"So," he continued as he saw his fiancee.
"We will start rebuilding unity of people by ourselves by our marriage."
I wished them every happiness, and we toasted with our glasses of sour milk for the better world.
(photo & story by Tengyo Kura, Rubavu) 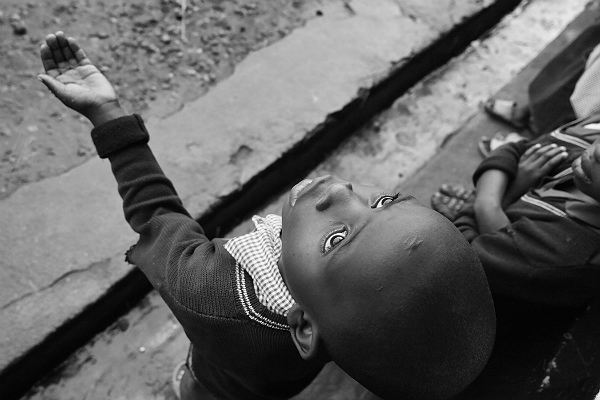 One late afternoon, the deaf-school pupils took cover under the eaves of the school from soft rain.
I was standing with some boys.
There was no much sound except raindrops hitting the roof and the ground.
One boy quietly extended his arm under the rain.
Raindrops began to dance on his little palm.
Then he looked up the sky.
Pale light of the gray sky shined his eyes gently.
Watching the boy I tried to listen to the sound of rainfall which he must have been hearing.
Somebody started playing an African drum in the art classroom.
It sounded like the rhythm of the drum tuned up to the sound of soft rain falling on the roof and the ground.
Soon the warm sunlight came back from behind the clouds.
I thank to the peaceful rainfall dance silently.
(photo & story by Tengyo Kura, Nyabihu) 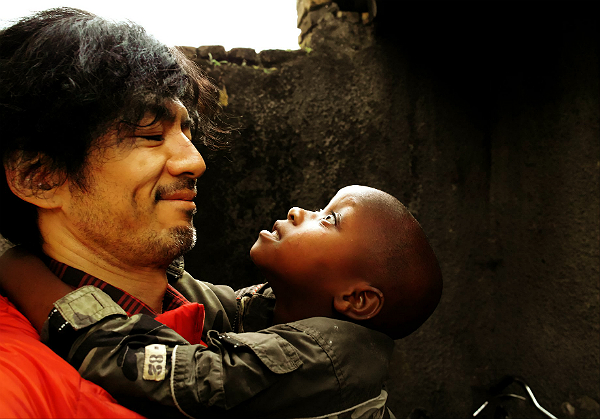 I met a girl at a deaf boarding school in a Rwandan forest.
She never sat in a classroom calmly during her sign language lesson.
She was curious to see the differences of our skin and hair.
She liked me to carry her and walk around.
She loved looking up the sky through the gap of eaves.
She must have been hearing the sky.
(photo & story by Tengyo Kura, Nyabihu)