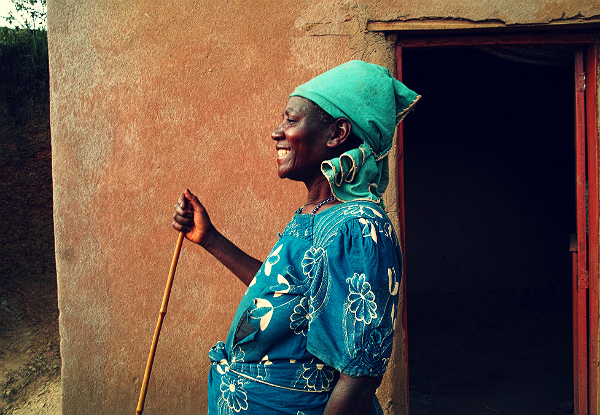 I met my friend's mother living in a remote village in the mountains.
Though she was a bit sick, she welcomed me to her place.
I told her how I had been living as a vagabond.
After listening to my story quietly, she gave me a piece of advice.
"No matter where you go, go with your love."
She told me that she had lost her husband some years ago.
Since then her friends had been taking care of her with love.
Now she felt okay because she understood that she was not alone.
"Go with your love."
Her word and beautiful smile are engraved in my heart.
(photo & story by Tengyo Kura, Musanze) 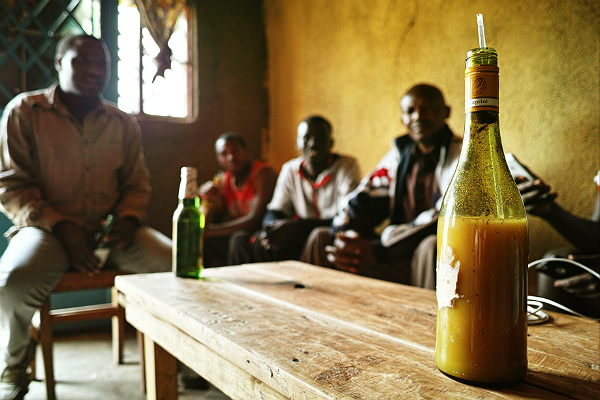 With my Rwandan friends I visited a small village bar where people drink homemade banana beer made of banana juice and sorghum flour.
I asked the people there the most sensitive issue in the history of Rwanda, the genocide.
First I told them that they didn't have to answer when they felt so, but they openly talked about it.
Elder men said that even this peaceful remote village was exposed to the menace of the genocide.
They expressed that some of them still could not trust other people because of the trauma.
In contrast, the youth born after the genocide only knew current happy Rwanda, and they seemed indifferent to what had happened in Rwanda.
However, one of the youth said that it was very important to keep learning about it to prevent another mistake.
Today Rwanda started on the road to a new history as a country of a million smiles.
I thanked them for sharing their thoughts on the painful experience with me.
The banana beer had very rich flavor just like the time we spent together.
(photo & story by Tengyo Kura, Musanze) 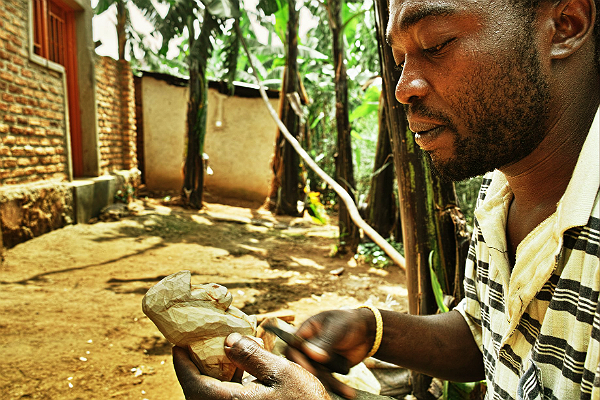 I visited an wood carver at his place surrounded by banana trees.
He has a beautiful family, and he makes wonderful wood carvings.
His favorite and most important work is a carved wooden gorilla.
He told me that when he curved gorillas, he shared his soul with them.
No wonder why his gorillas seemed very charming to me among many other wooden-carved gorillas at the biggest arts and crafts market in Rwanda.
(photo & story by Tengyo Kura, Murindi) 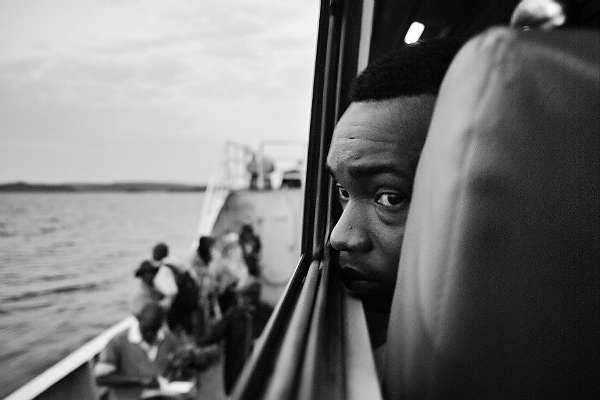 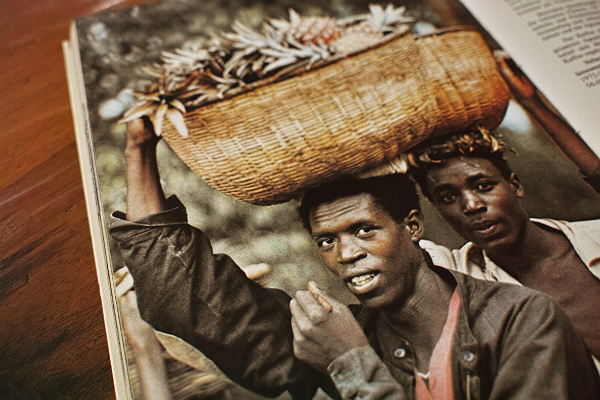 I am a pineapple seller.
I sell pineapples on the street every day.
Most of my pineapples remain unsold usually, I have to bring them back home at night.
It’s such labor!
I push my cart full of pineapples, soon my knees start crying in pain.
I go very slowly, everybody passes me even an elder woman with a cane.
I especially don’t like when a banana seller overtakes me.
He carries many bananas unsold in his cart too, but bananas are not as heavy as pineapples, you know.
Seeing banana seller’s back, I sometimes wonder if I should sell smaller fruits.
But in the end I always feel content with myself selling pineapples.
I like to see my pineapples occupying the street.
They stand proudly like warriors that bananas never could.
I sit behind them as the king of my pineapple kingdom.
One day I will sell out all of my pineapples, and I will leave the banana seller far behind on my way back home.
(photo & story by Tengyo Kura, Mwanza (book courtesy of Indian Public Library Mwanza)) 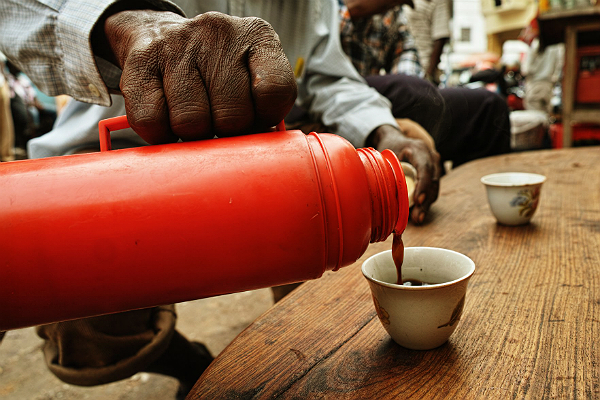 I was physically and mentally exhausted after moving into this town.
Sometimes I had to escape from the bustle and a mosque was the best place to spent some peaceful time.
There was a coffee stand nearby the mosque, so I often passed it.
One day, a group of men were having coffee there when I came near, and they invited me for coffee.
Because I was walking weakly they might have felt sorry.
To be honest I did not feel like talking to anybody, I just wanted to go home.
But they already prepared a cup of coffee and a chair for me, I could not excuse myself.
The coffee was very thick and strong, probably one of the strongest coffee I had ever had.
The men were curiously watching me.
Bitterness made me feel like somebody held my brain tightly.
I tried to finish the cup so that the men would not be disappointed.
Soon after I finished, they gave me another cup of coffee.
I was surprised but it was too late to stop.
The men went back enjoying their conversations.
I was listlessly looking at coffee inside a small cup.
A man next to me talked to me then.
"How long have you been in this town?"
I turned my heavy head and looked at him.
He seemed thoughtful.
"Only one month," I answered.
He smiled gently and continued.
"How do you like our Tanzanian coffee?"
I hesitated a bit, but replied honestly.
"It's too strong to me."
"Drink more," he said.
"Should I?" I asked.
"Yes, you should."
He insisted so but in a soft tone.
"Well, sounds like I have no choice," I accepted the second cup of coffee unwillingly.
He was pleasantly looking at me taking it.
Now I felt something different in the taste.
It wasn't that strong anymore, and I even tasted rich flavor that I liked.
"How was it?" he asked.
"Was it the same coffee as I had before?" I asked him back.
"Yes, absolutely," he smiled.
"Umm, it tasted different."
The man quietly smiled and poured coffee again.
"Take it," he said.
"Okay," I took the cup without hesitation this time.
The coffee tasted much better than the first cup.
"I don't know why, but this one tasted even a bit sweet..." I told him in confusion.
I realized that everybody at the table was watching me quietly.
The man next to me told me in a sincere voice.
"When you do something new, it usually takes time to be able to enjoy."
"Maybe you are not happy with your living in this town now, aren't you?"
I did not know how to respond.
"Try not to judge if you like it or not in the beginning. I'm sure you will find a way to enjoy."
I remained speechless, but felt very warm deep inside my body.
"Welcome to Tanzania."
He smiled and poured another cup of coffee.
"Enjoy our coffee."
(photo & story by Tengyo Kura, Mwanza) 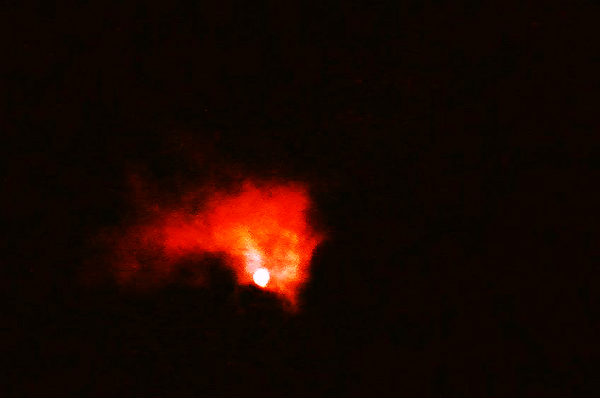 A young man holding a flaming torch high overhead ran through a village silently.
The most beautiful celebration of the advent of the New Year I have ever seen.
(photo & story by Tengyo Kura, Mwanza) 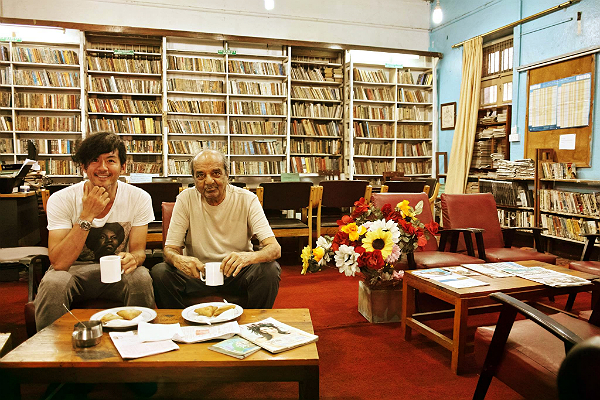 This is one of the oldest public libraries in East Africa.
Mr. Raman next to me took charge in 1964 when the library was abandoned with one book, one broken chair, and one big desk.
Since then he has taken care of the library on his own, the library has over 10,000 books today.
Mr. Raman is an enthusiastic teacher with more than 40-year experience.
The current President of Tanzania was one of his pupils.
He is 80 years old, but he does not look like so.
He proves that having love and passion makes people ageless.
(photo & story by Tengyo Kura, Mwanza) 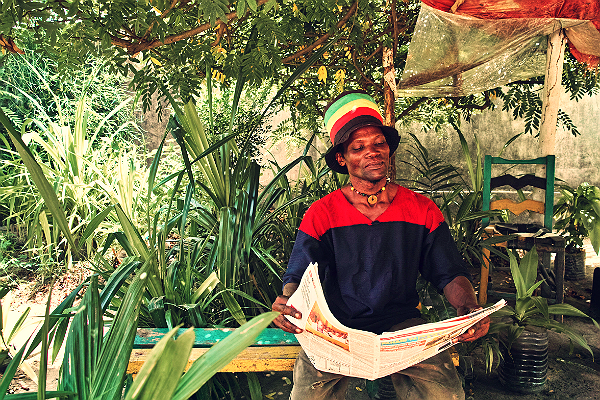 The man was sitting on a bench and reading a newspaper at the roadside.
Countless plants around him caught my eyes so did his unique hat.
I greeted him, and he gave me a smile back.
I asked him if he took care of all the plants on the roadside.
"Yes, they are all mine," he said.
"Come over here, I will show you my place," he continued.
I was surprised when I understood that the roadside was literally his private property.
There was a small bedroom covered by black plastic sheets, there was a doghouse as well.
What made me surprised more than anything was the number of the plants occupying the entire roadside.
"This is my business," he explained.
"I used to work at a company, then I became tired of serving people who gave me a salary."
"So I started selling plants. Now I'm the boss of myself."
His roadside jungle stretched about 50 meters and ended at a small river.
"I take water for my plants from this river, I also take a bath in this river, too," he smiled.
"By the way, I said that I was the boss of myself, but actually I'm still a servant to my plants instead of humans. Well, a plant is a better boss to have, they aren't nagging anyway."
(photo & story by Tengyo Kura, Dar es Salaam) 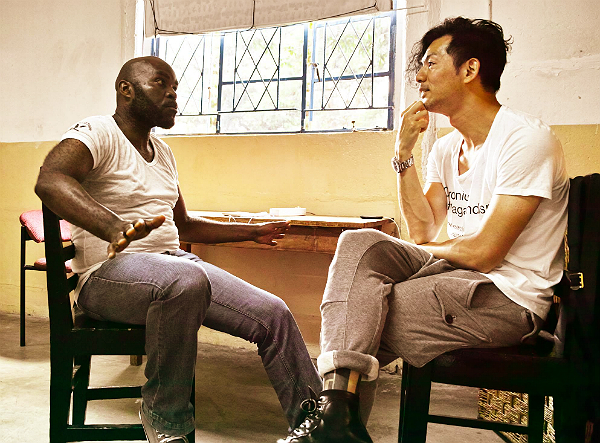 Tawanda is one of the young leaders of special-school teachers of Zimbabwe.
He is a teacher, dancer, and father.
And above all, he is a bridge between society and mentally or/and physically challenged children.
"There is no barrier between able and disable people. We are all the same as a life," Tawanda said.
"We can do things that they cannot do, but at the same time they can do something better than we do."
It is a challenge for the Zimbabwean society to remove walls and accept those who have disability.
To establish platforms where people can see how physically or/and mentally challenged contribute to society is an important issue.
"I just love those children no matter what. They always refresh my mind."
"This I can promise, even if my organization failed to get funds, I would go to school and would be with the children every day," he continued.
His eyes showed full of passion, and I found the strong possibility of humanism in his words.
Tawanda is the man of African big love.
(photo & story by Tengyo Kura, Harare)